Son of a Bun – Teaze

Teaze Son of a Bun Challenge.

Shout out to my friend Seb for letting me know about this challenge. It seems quite new and under the radar for my usual sources.

The challenge consists of:

You have 25 minutes to complete it to receive the meal for free. Fail, and pay the menu price of £19.95. 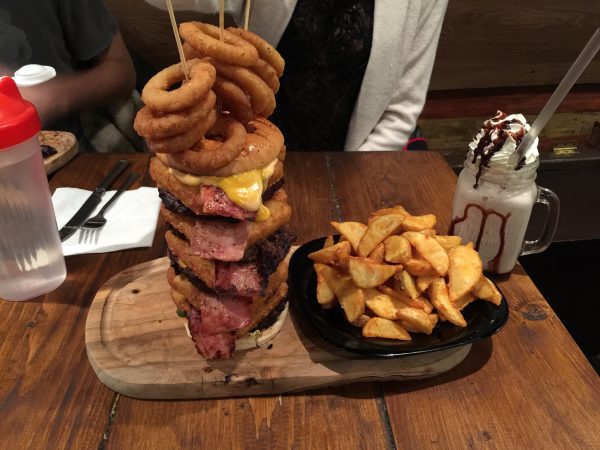 I’ve done challenges of a similar format before at Kua Aina, and Stax. Nonetheless, going into this one I was expecting just a regular five patty burger, thus I did no preparation for it. Again, a lack of research nearly cost me.

The success rate on the board is about 7/40 at the moment. Since I was expecting just a regular 5 patty burger, I took it fairly easy by not prepping after not doing challenges for a while, and came in wanting to beat it under 10 minutes.

Little did I know what I was about to get myself into. In addition to the patties, each layer was topped with slices of turkey bacon and two hash browns. I think other than the pickle and tomato at the bottom this challenge was just different shades of brown.

The patties were dry and hot when I began. Whilst I ordered medium-rare, they were medium-well, if not just completely well-done, as per regular orders. The more cooked a patty is, the tougher it is to go fast. When I realised how much heat was in the burger, I disassembled it to let it escape, chasing bites with water. After a patty I switched to the cold milkshake to chase the patties. Since it was part of the challenge, and very cold, I helped quite nicely. The patties took longer than usual, even though they weren’t very big due to dryness and heat. Nonetheless, I saw them off in around 5 minutes. I’d had finished the milkshake as well doing this. After, I quickly saw off the turkey bacon, which I must say was quite nice. It wasn’t hard or chewy like is the case usually in challenges, so I made quick work of it.

Next up were the hash browns. These were quite stodgy. So, even more water was required. At this point I was getting quite tired of the challenge. I think I saw off the whole burger and milkshake in under 10 minutes, as had been my original plan.

Finally, was the side dish of potato wedges, mixed with a few onions rings. I simply crunched them up and took small bites. Again, I had to resort to water to get them down fast since the currently best time was quickly approaching.

Overall, I finished in 13.30. This is a carb heavy challenge, lots of potato in different forms, so not something I typically fancy. It also made me use a lot of water to get through it fast since it just seem to draw the moisture out of me. Whilst quantity wise this wouldn’t be an issue, even unprepared, the desire to be fast meant I used up around a litre of liquid pushing the total capacity to early stages of unpleasant. You can coast it with little liquid other than the mandatory milkshake in 25 minutes. Whilst it’s not the easiest of challenges, it’s not the worst difficulty for what it is, just don’t eat beforehand.

I’m glad I got the win, and a record (for now), but I know I could have done a lot better and recovered from it better too had I actually prepared. Going into something that I thought would be 1-1.5kg and doing around 3kg (with liquids) and of such dry ingredients meant I felt it sitting like a lump in my stomach for over a day after the challenge. Not the most pleasant feeling, walking around with what felt like a stone.

It was good banter with those there, and another win in the books. Also, everything is Halal for those with the dietary requirement.

If you fancy giving it a go, you can find it at:

This website uses cookies to improve your experience while you navigate through the website. Out of these, the cookies that are categorized as necessary are stored on your browser as they are essential for the working of basic functionalities of the website. We also use third-party cookies that help us analyze and understand how you use this website. These cookies will be stored in your browser only with your consent. You also have the option to opt-out of these cookies. But opting out of some of these cookies may affect your browsing experience.
Necessary Always Enabled
Necessary cookies are absolutely essential for the website to function properly. This category only includes cookies that ensures basic functionalities and security features of the website. These cookies do not store any personal information.
Non-necessary
Any cookies that may not be particularly necessary for the website to function and is used specifically to collect user personal data via analytics, ads, other embedded contents are termed as non-necessary cookies. It is mandatory to procure user consent prior to running these cookies on your website.
SAVE & ACCEPT