Trash Can Challenge at the Flaming Grill 4

I’ve been to the flaming grill pub a few times to do the steak challenge and burger challenge. Just last week, they revamped the challenges and have introduced another one. 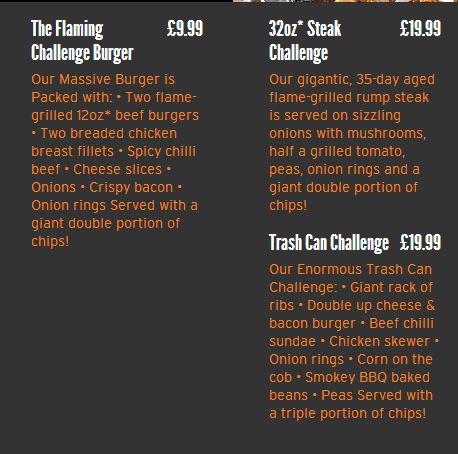 Our Trash Can Challenge is so big it can only be served in a bin lid! To be named a champion you’ll need to work your way through a giant rack of ribs, a double cheese and bacon burger, three portions of chips, a beef chilli Sundae, chicken skewer, onion rings, a corn on the cob, Smokey BBQ baked beans and peas.

For £20 its pretty good value. They finally worked out the best way to bulk out the challenges is to add chips. A triple portion of chips is a fair amount to eat. 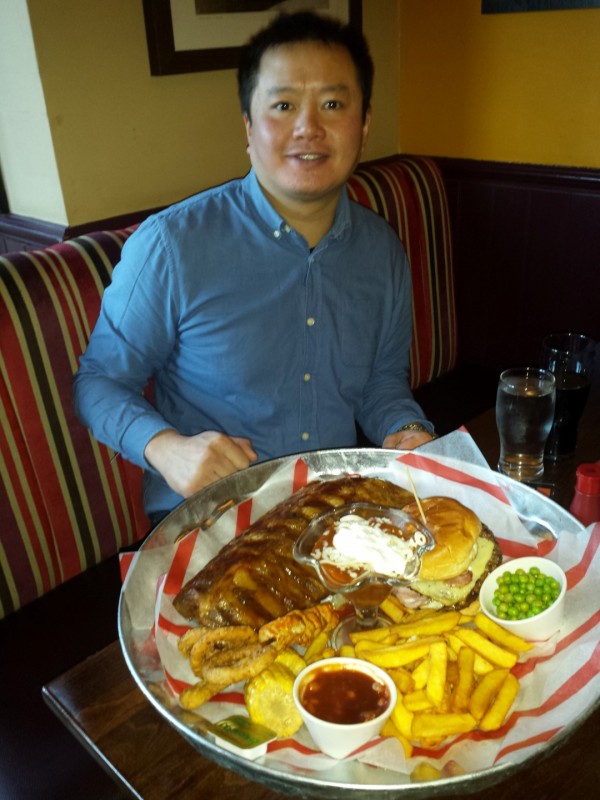 The trash can challenge

The picture here doesn’t really show the amount of chips. Doesn’t look too much until you see how it far deep it goes. Its not as bad as some challenges I’ve seen but its a fair amount of chips there.

I tackled the burger and chips first. Strange for an eating challenge, I was able just to pick the burger up and eat it. Usually, I am having to eat the patties first to get it down to a size I can fit in my mouth. The chips dipped nicely in the beef chilli sundae (thats the thing in the middle, just beef chilli with some white sauce on top). I was quite full after eating the burger. Its a hefty thing. I am guessing it was 12oz with bacon and cheese on it.

After the burger, there were still many chips left. I tackled the onion rings, chicken skewer, corn on the cob and mixed in the rest of the chips with peas and beans. I left the rack of ribs until the end. 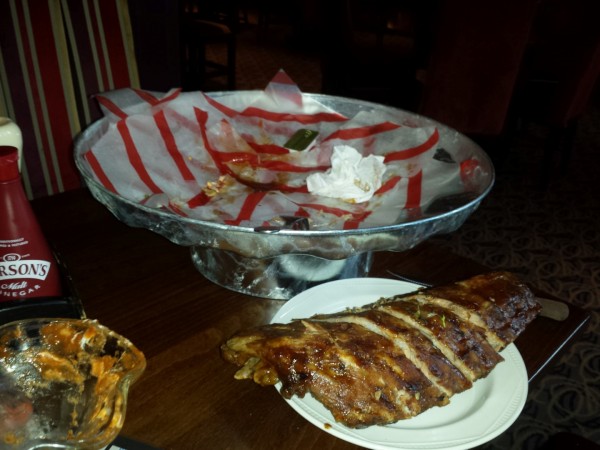 I was given another plate to eat the ribs off. It was pretty much impossible to cut the ribs on the bin lid. By now the ribs were a bit cold. With hindsight I should have eaten these before the chips. Cold chips are easier to eat than cold ribs. It was pretty slow going. I never stopped but I didn’t really enjoy the food at this point.

As there was no time limit, I took my time but approximately 37 minutes to do in total. The ribs took 17 of those. I probably could have done it all sub 30 minutes at a push. Its a tough one though. I expect it to be the hardest of the three challenges.

I did this at my local flaming grill pub which is the Ridgeway Arms. Its only been going a few days but I am the first one to do this at that place. If you look on Twitter, other people have completed it but many more have failed.

Here are the details if you want to have a go

but the chain is nationwide so there is probably one near you. Find them on facebook and twitter too. I’ll be back soon to do the 32oz steak challenge.

4 thoughts on “Trash Can Challenge at the Flaming Grill”